In motion, some cars tend to dawdle along while others sashay by. But few in their passing can drop the mic with such sensory overload, as a McLaren.

Intended to guide the brand through its next decade of growth, McLaren launched its current three-tier product structure in 2015, with the introduction of the Sports, Super and Ultimate Series.

Comprising the 570S, 570GT and the 540C, the brand-entry Sport Series is the newest range in McLaren’s portfolio and is the least expensive. Focusing, as it does, on driver engagement and high performance across all three models, with particular emphasis on ‘everyday usability’.

In the 570GT, McLaren has created a true sports car for life’s all – and every – day.

Style-wise, the 570GT’s tinted glass hatch softens the roofline, resulting in a more elegant profile than the edgier, flying buttress treatment of the 570S. The centre roof panel is also rendered in tinted glass. This creates a beautifully continuous dark graphic stretching from the base of the windshield to the rear deck.

No other visual changes were made to the design in the creation of the GT model, and none were necessary. It is already one of the best-looking mid-engine sports cars on the road. 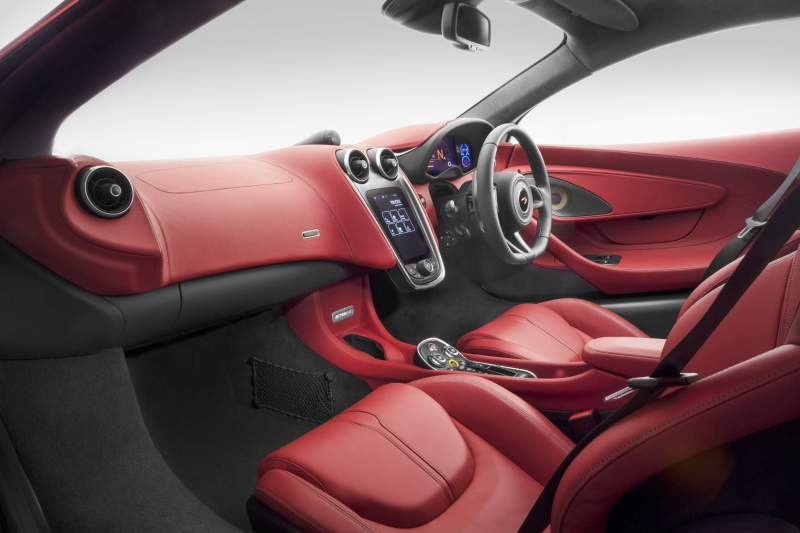 Ducking below the dihedral doors and climbing into the 570GT remains a bit of a chore compared togetting in and out of say, the new Aston Martin DB11, or an Audi R8. But, it’s worth it just to see the jaws drop as you arrive and pop open the doors. You can never get tired of that!

The 570GT’s concessions to comfort are subtle but numerous. In addition to the front ‘boot’, the ‘touring deck’ behind the cockpit adds 221 litres of cargo space – enough for a tiny bag or two, but little else.

Surprisingly, the total storage space of 371 litres is only a little less than the VW Golf’s 380 litres.

The touring deck is lined with delightfully soft leather and shuts via a side-hinged glass hatch that recalls the Jaguar E-Type’s tail door. Nappa leather trim is standard in the cockpit, and soft-close doors enable easy, cosseting closure. A new transparent roof lends an airy feeling to the cabin, and an optional folding blind can be snapped into place to block the sun.

The electronic instruments are the bee’s knees as the cluster changing configuration depending on the chosen driving mode. The portrait-style infotainment screen is small, but sensible in its logic and all switchgear has a quality feel.

At the core of the 570GT is its 562hp/600Nm, 3.8-litre twin-turbo V8 engine paired to the super-quick seven-speed dual-clutch transmission. Thanks to a slightly softened suspension and a two percent slower steering ratio, there is a less manic, more controlled feeling behind the wheel than the 570S. The specially-developed Pirelli tyres incorporate a sound-deadening feature that, along with increased cabin insulation, reduces noise levels by up to three decibels.

While the muffled exhaust system may betray the engine’s grunt, white knuckles will always tell the truth. The 570GT, despite being 37kg heavier than the 570S, is still phenomenally quick, with 62mph arriving in a blistering 3.4 seconds.

Evidently more refined and smooth riding than the 570S. The GT model draws from deep reserves of power and grip. The immediacy with which it changes both direction and velocity seems to defy physics, even in the wet. As with the 570S, the steering wheel tickles the fingers and turns are executed with razor-sharp accuracy and the brakes claw the car down from speed with stupendous, eye-popping force.

Ultimately, it is the 570GT’s refined character and quieter cockpit that may attract new buyers to the

brand. While its still-potent performance should keep traditionalists appeased. As a supercar, the 570GT straddles the line of everyday usability with aplomb. Making a stronger case than ever that glorious power and outstanding performance can, and should, be enjoyed as often as possible.

If you’re after a balance between performance and continent-crushing ability while enjoying considerably more comfort than available from most at this end of the market, the McLaren 570GT puts together a strong reason to take a drive.

To whet your appetite, snatch a spare week and play with the McLaren 570GT configurator.