How To Save Petrol – 7 Fuel Saving Tips

We just can’t seem to escape the rising costs of motoring these days. Ever-increasing fuel prices make the news all too often and it alone – more than any other – forms the largest proportion of our motoring expenses.

While we can’t avoid rising fuel costs, we are not entirely defenceless as there is much we can do to reduce the amount of hard-earned cash we pour into our fuel tanks. Here are some simple fuel-saving tips we can adopt for every journey:

• Firstly, the three major rules we should all adopt – drive smoothly, accelerate gently and read the road ahead to avoid unnecessary braking. ‘It’s common sense’, I hear you say. Of course it is, but common sense isn’t as common as we think it is.

• Avoid excessive speeds and do keep to the speed limits. Driving at 70mph uses around eight percent more fuel than travelling at 65mph. Mind you, that doesn’t mean you can be a numpty and drive at 30 in a 60.

• Check your tyre pressures regularly and follow the recommended pressures set by the car’s manufacturer. Under-inflated tyres equal increased drag resistance which requires your engine to work harder by burning more fuel to maintain the desired momentum. Recommended tyre pressures are usually found on a plate inside the driver’s door frame or the owner’s manual (yes chaps, there IS a manual).

Turn the Engine Off

• Nearly all cars sold these days have engine stop/start ecosystems fitted as standard, But, if your car doesn’t have that feature, turn the engine off if you think you’ll be stationary for quite a while (at a rail crossing, for instance). And yes, you may use your smug face in the knowledge others have PAID for their stop/start eco feature when all you’ve really done is turn the engine off. 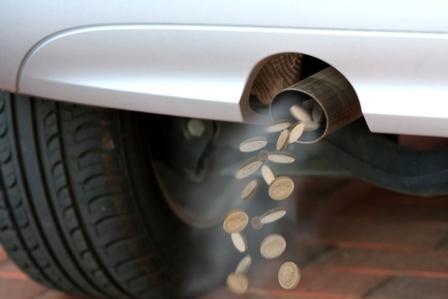 • Change up to a higher gear as soon as possible without making the engine labour or vibrate. Diesels, because of their wider torque band, can change up a gear when revs reach around 1,500-2,000rpm. For most petrol cars, changing up at around 2,000-2,500rpm would be about right.

• On a downslope, don’t be tempted to put the car in neutral because it won’t save you fuel. In neutral, the engine is at idle so is still using fuel. In gear – but not under power, electronic fuel systems cut off fuel to the engine which then turns over under its own geared momentum, while using no fuel at all. The same principle happens when you lift your foot off the accelerator…no fuel is used then either. Combine these two benefits, and you begin to understand how important it is to read the road ahead.

• The lighter your car, the less fuel it needs to burn to maintain momentum. Remove heavy or unnecessary items such as roof racks if they are not being used. During winter months, snow and ice equals water which, in turn, equals weight so remove it from your car before setting off. Besides being illegal on the car, slabs of snow and ice falling off as you pootle along is a danger to other road users and pedestrians in the vicinity.